Predicted storms with lighting reached the track, as race four was just under way.  DKC officials were forced to call the race for rain and lighting.  Sunday’s weather was perfect for racing.

But before the soggy red flag flew, some great racing action was had.  Highlighting both days racing was Springfield, Ill based CKI pilot, Randy Fulks, leading the weekend’s largest classes, Yamaha Pipe.

In Saturday’s second race Fulks thrilled his fans as he fought off challenges from a hard charging Nate Grindell.  Grindell’s final threat was at the finish line where they battled side-by-side. “I started way in the back and it took me awhile to get to the front.  It’s just a class field,” Fulks described after his first win. “I finally worked my way to the front there were guys all over me. I just held on from there. It was a tough race all the way. The CKI kart worked great, but we had the Vega Tires on it so it was a good package all the way around.”

Sunday was a different story as Fulks T/S Racing Engines powered machine’s Horstman clutch kicked in as Fulks flew into a huge early lead.  Fulks worked through the field and back to clean air.  From there he easily cruised across the finish line with his closest pursuer, Patrick Olsen, a distant second.

Five others were also double winners.  Mallory D’Augustine, of Canton, Ohio, led karting veterans Fran Mazzucotelli and Jerry Cole twice for 100cc Limited Enduro’s top three. In Final 1 D’Augustine was flying.  When she took the checkered flags she had built a very comfortable cushion over Mazzucotelli.

“Yesterday’s win was a rough one because of the rains that came all most as we hit the track.  The first seven or eight turns were dry.  Everything else was a mess all the way down the back shoot through turn 17,” D’Augustine said of her first win. “ The T/S Max chassis was great.  We put fresh tires on after practice to see if we could bump it down a second or two.  We were where we wanted to be going, so we were hooked up and ready to go.” As tough as her first win was, Sunday’s was an all out battle with Mazzucotelli down to the wire.

“Today I had to fight my way through a lot of traffic.  There were over 70 karts on the track,” D’Augustine noted.  “So it was a battle all the way through.”

“Yesterday I had a mega start.  I started from P-10 and I quickly climbed through the field until I got to third,” Dhanoolal explained.  “By mid-race I was quickly catching Billy. Throughout the whole race it was one crazy battle and on the last lap I held them off and that’s how I won yesterday’s race. Our strategy was on point and so was my driving.”

“The kart handled pretty well.  The set-up was perfect,” he said after his second win.

Ben Eberhart bagged both Vintage Piston Port USA finals one and two. Saturday he was ahead of Arthur McKenny, Sunday McKenny was a tick closer.  Rounding out Saturday’s top five were Phil Copeland, Mark D’elia and John Copeland. Sunday it was filling in the top five.

Sunday’s Final 2 went down to  the wire where Gaynor, Jr. and Justin Sanders battled door-to-door across the stripe where Gaynor edged out Sanders by just 0.039 seconds.  Following in third, fourth and fifth were a trio of Smiths, M.J., Tom and Timothy.

Notable single winners included Otto Vollmerhausen leading 17-Piston Port Sprint racers across the stripe.  A last lap tangle among the top three allowed Vollmerhausen to break away for the win.

You could have thrown a blanket over the rest of the top five.  Karting veteran Louis Magiera was on his heels just 21.965 seconds late. Eric Stockford was 25.518 second behind in third.  Following in fourth and fifth were Adam Trumbley and James Sorrentino.

Allen Hollinger and Brandon Schenkel split the Formula 125 Finals.  Saturday Hollinger finished ahead of Schenkel. Sunday Schenkel avenged himself with a win over Hollinger.

“The CKI chassis handled great, especially in the turns,” Hollinger reported.  “I got by a couple of guys into the lead and I cruised from there. I want to dedicate this win to my father.”

That wraps up the 2019 AKRA Road Racing season.  Awards will be presented at next year’s Mid-Ohio race.  Plans for the 2020 season will be announced soon. 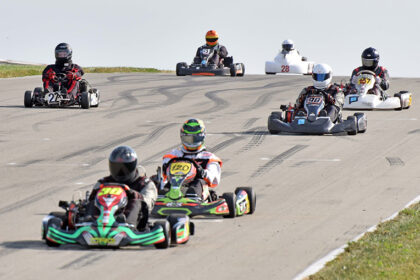 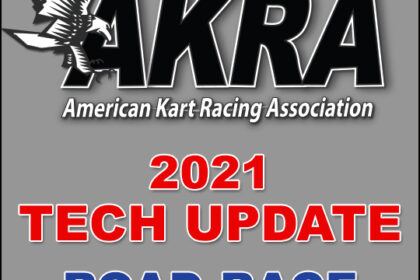 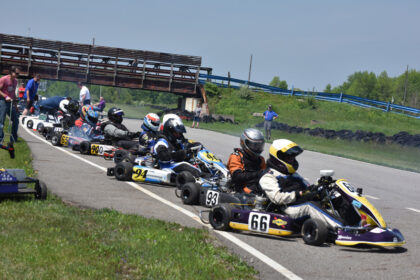 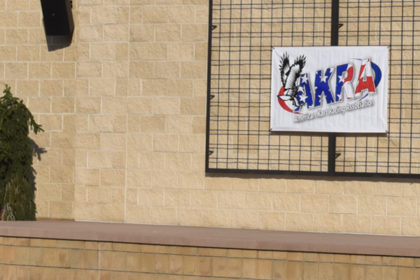